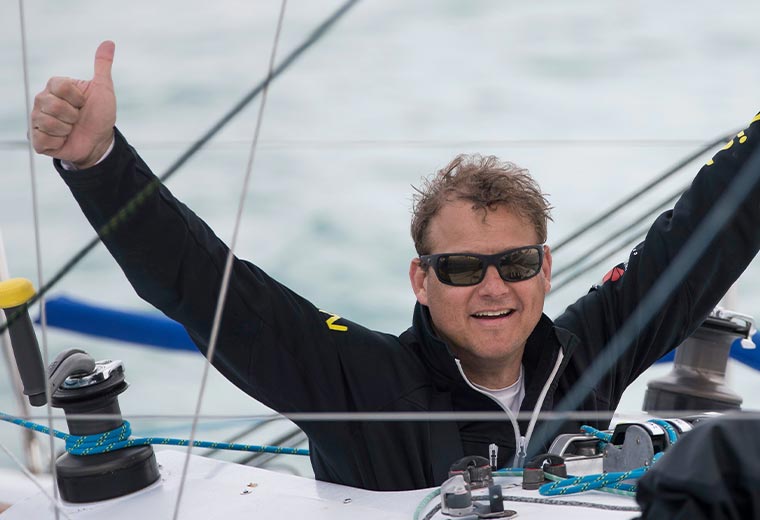 Mike grew up racing laser dinghies from the age of 7 in the crowded waters of Singapore harbour, and cruising with his family amongst the idyllic, palm fringed islands off the coasts of Malaysia and Thailand.

He continued to race throughout his adult life.  For a brief stint after university on large private sailing yachts, and then later socially in Hong Kong, Singapore, the Middle East, and, briefly, back in the UK in the rain.

All this changed once his children left for university and a chance meeting at the London Boat Show introduced him to the Clipper Round the World Race.  Within four months he transformed from ‘nose-to-the-grindstone’ office worker ant to fully-fledged round the world ocean racer.

The Clipper Race completely ignited in Mike a passion for the sea, for nature and for offshore racing.  As a watch leader on the winning boat in the 17/18 race, supporting skipper Wendy Tuck as she became the first woman ever to skipper a victorious circumnavigation, he learned what it takes to motivate ordinary people to achieve far more than they ever thought possible.  He learned about maintaining an ocean-going racing yacht, to face the toughest environments imaginable and about the trade-offs required between speed and safety that are such a critical part of pushing a yacht so far from help and support.

It also introduced him to Campbell.  They raced half-way round the world together and formed a firm friendship.  That friendship is at the core of the Outlaw / Spirit of Adelaide campaign.

Immediately after returning from that first circumnavigation with the Clipper Race, Mike turned his back on corporate life, and built up to the Yachtmaster Ocean qualification needed to become a professional offshore racer.  He was also selected to join the 2019/20 Clipper Race as a professional mate.   That second circumnavigation reinforced his passion for the extraordinary wildlife that is only found hundreds and thousands of miles from land, and helped strengthen his teaching and mentoring skills.

These mentoring skills came into their own as he led a team of talented amateurs through a successful 2021 Rolex Fastnet Race campaign.  As skipper of a Challenge 72 yacht, he taught the novice sailors the skills they needed and built a culture of caring, safety and competitiveness, through the four qualifying offshore races, as well as the classic race itself.

As a skipper, he has led the deliveries of powerboats, catamarans and sailing yachts in both Asia and the Med.

Mike brings to sailing, and to the Outlaw crew, over thirty years of leading teams in the corporate world.  His CV includes time in the US, Europe, the Middle East and Asia with Barclays, Deutsche Bank, private equity firm Actis and emerging mobile phone operator Zain.

Whilst at Zain, he innovatively used sailing as a team building tool, by bringing employees from across the Arab world to train and compete together in the incredibly challenging Farr 30 classic, Sailing Arabia the Tour, for three successive race seasons.

As well as the Rolex Fastnet Race, he has also raced in many other offshore classics, including the Rolex China Sea Race and the Sydney Hobart.

His ever-supportive wife Nicky, who played a key role in the successful management of his two Clipper Race campaigns, is the team manager for Outlaw/Spirit of Adelaide.